I Used To Have A Radio Show

Neil McKenty was probably the most popular English-language talk show host in Montreal radio history. Whatever you might have thought about his opinions or the way he dealt with callers, the fact is that his legacy is still evident over a quarter of a century after he left the radio business. It was definitely personality-driven radio, as was the case with many of his Montreal contemporaries of the time. There were no e-mails to read and no text messages - it was talk radio in its purest form and it was highly entertaining.

My recollections of the content of McKenty’s “Exchange” are limited, but my memories of his voice are rock solid. When I was young, like in so many other households, the radio dial was set in stone. I was introduced to the medium of radio by hearing the voices of George Balcan, Ted Blackman, Gord Sinclair and Neil McKenty. I can't recall what they were talking about during the early 80s, but I remember their voices as if it were just yesterday. As I got older, I learned that there were other frequencies on the dial and I discovered some great stuff on differing stations local and far away. 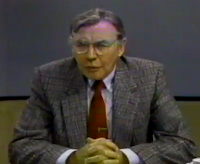 Someone who is old enough to remember McKenty’s program told me that at first his tolerance for a caller’s dissenting opinion was pretty limited. It seems that stance mellowed a bit later on however, especially with his online presence. That person also recounted a story of a particular program in the early 1980s where the seal hunt was the topic of the day. Mr. McKenty was aparently very much against it. In the hunt's defence, one caller pointed out that for some native peoples, seal meat was also used for food. McKenty responded that he’d have to try some of that “flipper” meat… Then there was the time a young girl called up and used what McKenty seemed to think were very “big” adult words. He asked her where she had learned them. “From listening to you” was her response.

Neil McKenty hosted a TV talk show for a brief period in the late 1980s, but then seemed to leave broadcasting for good. From then on, he expressed his opinion in print. Less than a year ago, I discovered his relatively new blog entitled - what else - “Exchange”. It was clear that despite being in his late 80s, McKenty had overwhelmingly accepted and embraced the new digital age.

Neil McKenty was another Montreal radio figure who had a lasting influence on others. His passing is another reminder of a time in local radio that has come and gone and can never be repeated.

Yesterday's News is a program on Radio Centre-Ville in Montreal. The show is comprised of a news review, a look back at historical events and opinions about media, politics and popular culture.

The program focuses primarily on Montreal-area news, history and nostalgia.

Mark Korman
Montreal, Quebec, Canada
Broadcaster at Radio Centre-Ville since 2009 and host of “Yesterday’s News” since June 2010. I have a deep appreciation for Montreal’s radio past.